Join us on Dec 7 for a screening of a riveting cinematic portrait of a family in crisis to offer thought-provoking commentary on modern life in Russia.

Presented by RACC in collaboration with the Russian and Slavic Studies Program, Hunter College, CUNY, feature film "Loveless" is a scathing indictment of the modern-day parenting, a world of selfish adults pursuing their petty little enjoyments while ignoring the children they voluntarily brought into the world. Directed by Andrey Zvyagintsev, a Russian film director and screenwriter, best known for his film "The Return", which won him a Golden Lion at the Venice Film Festival, "Loveless" was nominated for a 2017 Academy Award for Best Foreign Language.

Still living under the same roof, the Moscow couple of Boris and Zhenya is in the terrible final stages of a bitter divorce. Under those circumstances, as both have already found new partners, the insults pour down like rain in this toxic familial battle zone, always pivoting around the irresolvable and urgent matter of Alyosha's custody, their 12-year-old only son. Unheard, unloved, and above all, unwanted, the introverted and unhappy boy feels that he is an intolerable burden, however, what his parents don't know is that he can hear every single word. As a result, when Boris and Zhenya finally realize that Alyosha has been missing for nearly two days, it is already too late. But is this a simple case of a runaway teenager?

Attention: To reach the lecture hall on time, please allow at least 15-20 min time after you check in at Hunter Hospitality Desk in the West Lobby (entrance next to the outdoor sculpture at the SW corner of Lexington Avenue and 68th Street; subway line #6). After getting to the 3rd floor by the escalator, take the overpass to Hunter North Building and veer left to the stairs (or elevators), which will take you to the 5th Floor. When you reach it, go to the farther end of the corridor, then turn left. The entrance to the Auditorium 510 Hunter North is the last door on your left. The screening starts at 6:45 PM promptly. 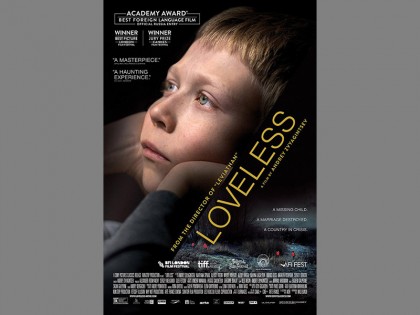