Ruth Zernova (born Ruth Zevina in Odessa in 1919) was an author of many short stories and several novels.

Ruth Zernova (born Ruth Zevina in Odessa in 1919) was an author of many short stories and several novels. Her writing career started in the former Soviet Union, where she published her first short story "Skorpionovy Yagody," which appeared in the popular "Ogonyok" magazine in the early 60's. This first publication signified the end of a long and hard journey through two wars, marriage, two children and imprisonment, but also some good times during Khrushchev's "Thaw". It also signified the beginning of a fruitful writing career.

Zernova's life began in Odessa, the city in which most of her stories take place. Following high school, Zernova went to Leningrad where she studied literature at Leningrad State University. Zernova was a brilliant linguist, and during her second year at university, she enrolled in a crash course in Spanish, and was sent to Spain to work as an interpreter for Russian military advisors during the Spanish Civil War. After the war she came home to work for the Naval Reconnaissance Office and later worked as a TASS correspondent during the Second World War.

In 1949, Zernova and her husband, Ilya Serman, were arrested and imprisoned for 'anti-soviet propaganda' and sentenced to 15 and 25 years respectively. Their two small children were separated between two sets of grandparents in two different cities. This period in Zernova's life is reflected in her short stories through unique and emotional dialogues that were influenced by the women in the camps with whom she shared hardships and rare light moments.

The family ordeal ended with the death of Joseph Stalin in 1954, and a long period of Zernova's translations from French and Spanish classics followed. Only when Khrushchev's "Thaw" gave voice to scores of post-Stalinist writers, many of whom had been victims of the terror themselves, did Zernova's prose appear in published form. Soviet readers finally had a chance to read about women's experiences of war, labor camps, and daily drab of Soviet life, told by a sophisticated and knowing woman writer.

Zernova's stories, novels, and translations were published in the Soviet Union and later, after her emigration, in Israel, other Western countries, and former socialist countries of Central Europe. In the United States, Rutgers University Press published Zernova's book "Mute Phone Calls" in 1991.

Zernova's long and difficult, but interesting and fruitful life ended on November 15, 2004.

The memorial is organized by The Russian American Cultural Center (RACC), Mark Serman (R.Zernova's son), and his family and friends. 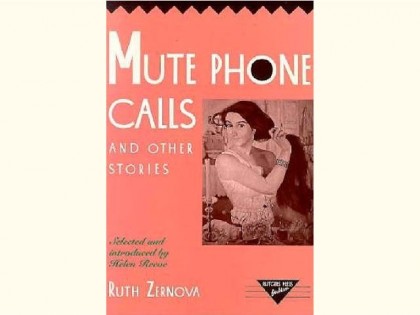